The travel plans have been made! 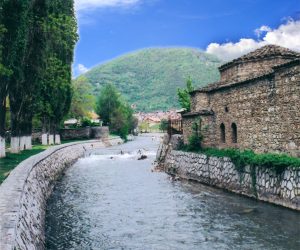 In this October, the German Rhine Philharmonic Orchestra will fly to Macedonia (or soon to be the Republic of Northern Macedonia, see the reports in the “Tagesschau“) to cultivate international cultural exchange. With two concerts in the provincial capital Skopje and in Tetovo, the orchestra makes a guest appearance at the “Skena e Muzikës Serioze Shqiptare” festival. In its luggage: Brahms’ 3rd symphony, Gershwin’s “Rhapsody in Blue” and a world premiere. The ensemble will present its musical programme on 22 September at the opening concert of the 2018/19 season of Pro Klassik e.V. The trip is at the invitation of the cultural association “Allegretto”, which organises the festival.

It all starts on 20 October, when the musicians of the GRP board the plane. The first stop in the Balkan republic will be the town of Tetovo, located in the northwest near the border with Kosovo. Together with young Macedonian professional musicians who will support and accompany the orchestra’s stay, the German Rhine Philharmonic Orchestra will give a concert on 22 October at the Tetovo municipal theatre as part of the festival.

Introduction by the composer Fatos Lumani

A special highlight for the musicians: the orchestra will meet the most famous Macedonian composer of the time, Fatos Lumani (*1983), who will support the players in their work with an introduction to his works. Lumani’s concert rhapsody for violin, piano and string orchestra is part of the musical programme.  Fatos Lumani is currently working on his opera “Skënderbeu” (Skanderbeg), in which quotations from his concert rhapsody can be found. The work is about the Albanian freedom fighter from the 15th century and will be premiered on 28 November 2018 at the Skopje Opera House to mark the 550th anniversary of the death of the Albanian national hero. 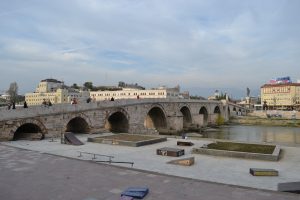 From Tetovo we continue with destination Skopje. The GRP will give its second concert on 23.10. in the new philharmonic hall of the state capital, which was only opened in 2017. The concerts of the German Rhine Philharmonic Orchestra are the highlight of the festival and thus extend its radius of action, as it normally takes place exclusively in Tetovo.

Tourism and cultural exchange in Macedonia

Of course, music is at the centre of the trip to Macedonia, but what would it be without the exchange about it! And so the German Rhine Philharmonic Orchestra is particularly looking forward to the Macedonian musicians – budding professionals – who will support the orchestra during its stay. Of course, the social and touristic aspect should not be neglected. A joint excursion to Lake Ohrid on the border with Albania will conclude the time spent together before returning to Germany at the end of the concert week.

The German Rhine Philharmonic Orchestra is extremely pleased that the Goethe Institute is supporting the trip and the cultural exchange in Macedonia, as well as the cooperation with the German Embassy in Skopje.

2018 concert tour to Macedonia is supported by