Skip to content
Home » news » In partnership with the Düsseldorf Airport

Special instrument transportation, customs regulations, musical serenades on board – orchestras travelling by plane know this well enough. The German Rhine Philharmonic Orchestra is now looking forward to a new experience together with the Düsseldorf Airport. For one year, the airport and its neighbourhood office will sponsor the orchestra in the form of its DUS Ambassador Program.

Financial injection for the orchestra work 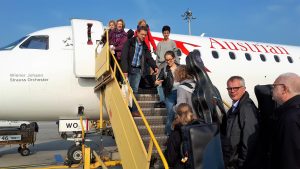 The GRP on its way to Macedonia

Already on several occasions the musicians of the GRP have had positive experiences with the Düsseldorf airport. Most recently last October when they started their concert tour to Macedonia from Düsseldorf. In another way, the recent encounter with the airport this year was also quite wonderful.

The company is helping the orchestra with an injection of funds from the DUS Ambassador Program. The program, which was launched in 2016, specifically involves the airport’s employees. As “DUS ambassadors”, they arrange for financial aid from Düsseldorf Airport to their association, provided that they are involved in it on a voluntary basis. GRP receives 1,500 euros from the voluntary work of an employee of Düsseldorf Airport for GRP, which is a registered association.

The sponsoring and donation concept of Düsseldorf Airport generally focuses on clubs from the immediate vicinity, i.e. from the communities that are particularly affected by aircraft noise. Therefore, the German Rhine Philharmonic Orchestra is all the more pleased that the DUS Ambassador Program contributes towards their donation funds.

More professional conditions for musical activities thanks to Düsseldorf Airport 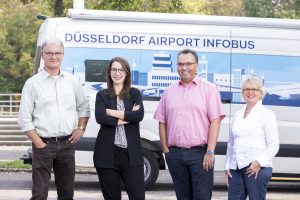 The staff of the Airport Community Office

The German Rhine Philharmonic Orchestra would like to invest this financial support into the professional design and representation of its musical projects such as the constant request for a stable platform for the conductor during rehearsals and at concert venues. With a mobile and professional solution, the GRP will now find a long-term solution through the sponsoring funds. In addition, the association would also like to improve the external presentation of the orchestra, for example by having displays and banners created. They should serve as advertising and help to create a visual framework for concerts.

The German Rhine Philharmonic Orchestra would like to thank Düsseldorf Airport and is looking forward to welcoming its employees to the concert in the near future.