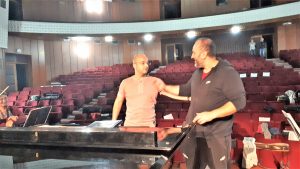 Desar Sulejmani and Fatos Lumani at a rehearsal in Tetovo

One of the goals of the tour was the cultural exchange between German and Macedonian musicians. This is the reason young Macedonian professionals from the State University of Tetovo and from Peja (Kosovo) joined the orchestra for the final rehearsals in Tetovo. They enriched the GRP during the tour – not only musically. Before the first concert Fatos Lumani presented his “Concert Rhapsody for Orchestra, Violin and Piano” and gave valuable hints for the interpretation of this powerful piece (Birgitta Winnen, violin and Desar Sulejmani, piano). The Albanian-Macedonian Lumani is currently the most famous composer in the country. He is also the chairman of the Allegretto Association and organizer of the Skena e Muzikës Serioze Shqiptare festival.

The GRP also brought with them Johannes Brahms’ 3rd Symphony and George Gershwin’s “Rhapsody in Blue” with Desar Sulejmani in double role as the pianist and conductor.

Sold out concerts and standing ovations 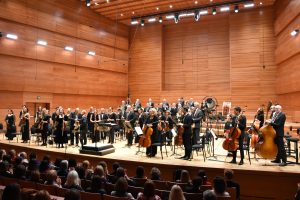 The exceptional appreciation of the Macedonian audience for the performance of the German Rhine Philharmonic Orchestra was already evident on the first concert evening at the Tetovo Cultural Palace in front of around 900 spectators. Standing ovations accompanied by seemingly endless applause and numerous photographers from the audience after the concert delighted both the musicians from Germany and Macedonia. The second concert of the orchestra (concert review on Opus Alb) took place in the modern and excellently equipped Philharmonic Hall in Skopje during the tour in Macedonia. The venue was also sold out with 1000 spectators and provided a beautifully fitting setting for the festival.

Tour in Macedonia supported by Goethe-Institute and the German Embassy 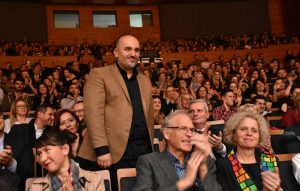 Fatos Lumani among the audience in th Philharmonic Hall in Skopje, the German Ambassador Thomas Gerberich and more representatives of the German Embassy

A concert tour is an elaborate and costly affair. Therefore, the German Rhine Philharmonic Orchestra is grateful for the financial support of the Goethe-Institute, which contributed significantly to the travel costs. The German Foreign Office was also very supportive on site and helped to promote the concerts. Last but not least, after their successful concert in Skopje, the musicians of the German Rhine Philharmonic Orchestra were delighted by the friendly reception provided by the German Ambassador Thomas Gerberich and his staff at his residence.

There was also an opportunity some touristic activities. With an excursion to the mountains of Tetovo and a sunny autumn day at Lake Ohrid, the musicians of the orchestra got to know the beautiful sights of Macedonia.